Packet Loss, or “Why Is My Sniffer Dropping Packets?” 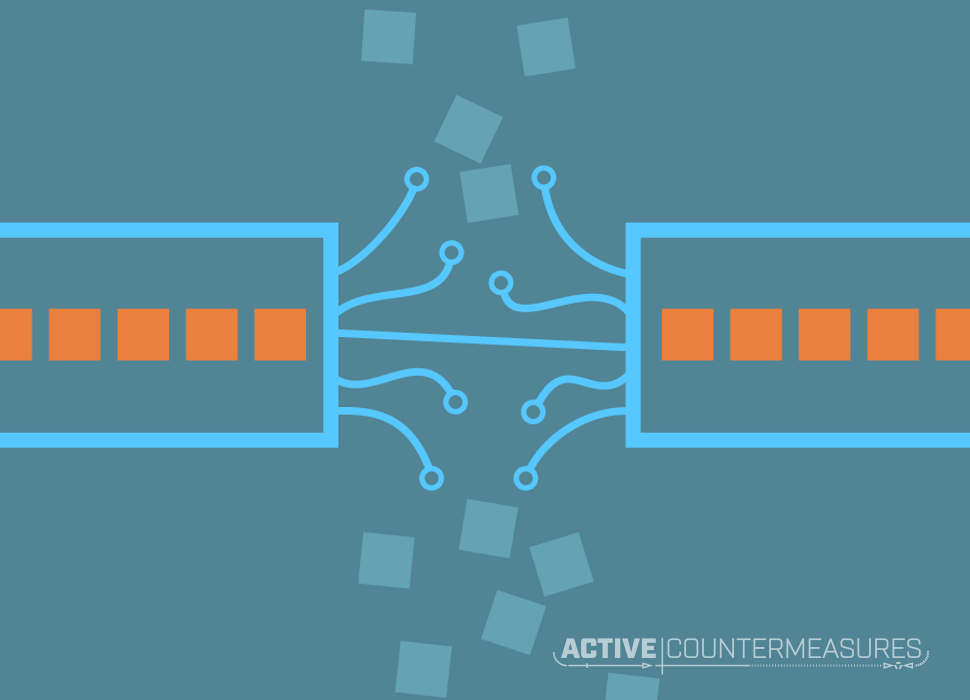 When I run a sniffer on a network, I assume I’m going to see all packets on that network. This is rarely the case. 🙂

Packet loss is a topic that comes up frequently when talking about capturing and analyzing packets from a network. In this blog we’ll look at what it is, why it exists, and what you can do to minimize it.

In our example we’re running Zeek (source code), an open source packet capture and analysis program that runs on Linux and MacOS.  While we may occasionally refer to Zeek in our “potential fixes” section, the general concepts and approaches we discuss should apply to any packet capture software running on any platform. 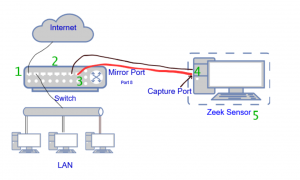 What Is Packet Capture?

The overall goal of a packet capture tool is usually to listen to all the packets flying by on a network, grab a copy of each of these, and analyze them (or sometimes just save them to disk). There are a few things we need to consider: 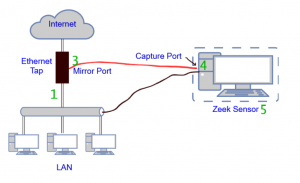 What Is Packet Loss?

Ideally, we would get all packets going to or from the monitored port on the switch – that would be 0% packet loss, and if that always happened you wouldn’t need to read this blog. 🙂

In the real world, it’s very common that somewhere between the ethernet cable that brings packets into your switch and the running program that’s analyzing the copies, some percentage of those packets will never be analyzed because of packet loss.

Here are the 5 major reasons why we lose packets in capture. The numbers for these correspond to the green numbers on the two diagrams above.

If you look carefully at the second (tap) diagram, you’ll see it doesn’t have a “2” – that’s because a tap should always have enough processing power to copy packets over to the mirror port(s).

If your tap has a single mirror port, it technically could run into problem 3 (stuffing 2Gb/second of traffic through a 1Gbps transmit port.) More expensive taps commonly have 2 output ports, one for each direction of packet flow. That arrangement will not have problem 3.

What Else Can Happen That Makes Packet Loss Spike?

The above spikes can be triggered by either malicious or benign traffic.

How Can I Detect That It’s Happening?

Zeek can detect gaps in TCP conversations by looking for missing packets in the middle of the stream. Based on this it can report on the approximate percentage of packet loss every 15 minutes. Since TCP traffic is around 90% of what is seen on the network this is a reasonable measure for overall packet loss.

By measuring the TCP gaps Zeek can see packet loss for any of the 5 reasons we mentioned above, not just packets that were dropped by libpcap.

At the end of each hour, this file is compressed and saved to the same dated directories as the rest of the Zeek logs, so you can look back at those files to see when spikes have occurred over a 24 hour period:

While there is some packet loss here, these example lines all report under 1/100th of a percent of loss.

No matter which approach you use to detect packet loss, make sure you look through an entire day. A capture program that is able to keep up quite well overnight might start to lose packets as the network load goes up when people arrive for work. Similarly, the capture program does just fine during the workday but starts to miss huge numbers of packets when 75 system backups all start at 2am.

How Does It Affect the Packet Capture Tool?

In all 5 of the above problems, the end result is that the capture and analysis program never does the processing on the missing packets.

It’s a little like trying to read a long book where you get to certain pages that are blank.  Could you still figure out what’s happening?  Probably, if the number of blank pages were small compared to the length of the book.  If you were missing up to, say, 3% of the pages you could still follow along by using your imagination.  🙂  If 5-20% of the pages were blank, you might totally miss parts of the story.  If over 50% of the pages were missing, it would basically be hopeless to understand what’s going on.

Even though there are no fixed percentages for “how much packet loss is acceptable”, here are some general guidelines:

Does the Tool Care?

So this is an interesting question that can only be answered with knowledge about why you’re capturing the packets in the first place.

If you need a perfect copy of all traffic flowing in and out of your network for archive, forensics, auditing, or legal purposes, even a small amount of packet loss would be unacceptable.

If the capture tool is looking for general patterns, like a) general network traffic statistics, b) identifying traffic types, or c) looking for live systems and their characteristics, you may not need to see everything. Those tasks can still be performed even when a small percentage of the traffic is not analyzed.

What Can We Do to Minimize It?

There’s one more approach to consider.  If it’s not practical to do the analysis on live packets, you might consider just saving packets to disk instead of analyzing them live.  These packet capture (aka “pcap”) files can be analyzed later on a different system or even a cluster of similar systems.  Keeping up with a faster flow of packets then turns into adding more analysis systems to the cluster.  Note that this approach can mean writing huge amounts of data to disk, so make sure your storage can keep up.

Problem of trying to send too many packets/second through the span port
https://www.activecountermeasures.com/why-you-cant-monitor-a-1-gb-connection-with-a-1-gb-span-port/

Capturing in a cloud environment
https://www.activecountermeasures.com/cloud-network-and-virtual-machine-monitoring/

Background and explanation of switch backplane capacity (it explains why a 12 port gigabit switch may not be able to handle 12 gigabits of traffic when all ports are fully loaded.)
https://www.auvik.com/franklyit/blog/backplane-throughput/

Many thanks to Chris Brenton for his review and all he’s shared about network design and packet capture. Thank you to David Quartarolo for creating the network diagrams and his suggestions. Thank you also to Shelby Perry and Keith Chew for their help in publishing this.

¹ Depending on the vendor, this can be called a copy or span port – we’ll use the terms interchangeably.