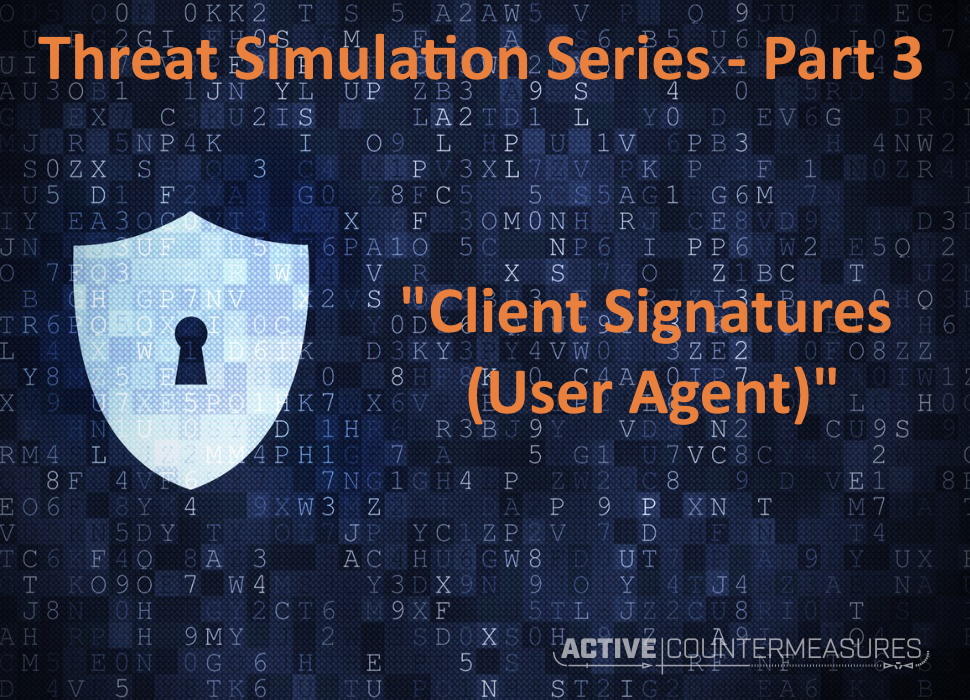 This article is number 3 of 8 in a series on testing Threat Hunting software to make sure that it’s configured correctly and working successfully. If you’ve not already read the “Threat Simulation Overview and Setup” article, start there and return here to test whether your Threat hunting platform can detect odd client signatures.

When a web client connects to a web server it sends a User Agent, a banner that describes the software in use, like:

That client is Firefox version 73.0 running on Mac OS 10.12 on a Macintosh using code from the Mozilla and Gecko projects. We can assume that identical software packages running on identical OS’s with identical libraries will have identical User Agent strings.

Now think about a piece of malware trying to communicate with a Command and Control (C2) server; what banner string should it pick? Describing itself as “Malware 1.0 (about to erase your systems)” is a little on the nose. 🙂 That said, it certainly could; a software package can describe itself with any string it likes, and on most networks that would never be noticed. The better approach would be to use a string already used by existing software – like the Firefox string above – so if anyone took the time to check they’d see a legitimate software package and hopefully ignore it.

Because of this, we can look at the banner strings used on the network, and focus on the rarest of them. In that group we’re likely to find the following things:

This is surprisingly simple to simulate; two of the most popular command line web clients support lying about their User Agent (mostly for the time when one wishes to appear to be a different web browser because the server in question changes its behavior based on the client identity).

In the initial setup for these checks we installed both wget and curl. We’ll give command line examples for both.

You should have a web server installed on the External system listening on port 80. To test this, run either of these on the Internal system:

Both should return an HTML page, likely claiming that “Apache has not been properly configured”. That’s just fine – we only need a web server that’s accepting requests, and don’t care what HTML page comes back.

If you get “Connection refused” or some other error code, double-check that Apache is installed and started, and the firewall allows incoming traffic on port 80.

Now we can place HTTP requests to the External system. We’ll use a banner string below that was once legitimate, but for a web browser from 2004. 🙂

Once you’ve run these, you can press “Ctrl-A”, then d to disconnect from the screen session and let those commands run in the background. You can reconnect at any point with:

The Threat Hunting software should see and report this User-Agent string as Rare, as there’s effectively no chance it could be used by any other legitimate package on your network.

tcpdump doesn’t specifically recognize the User-Agent field in the TCP conversation, but it can display all the text sent or received if you’re willing to look down for it. By adding “-X” to the tcpdump command, it will show the entire payload in both hex and ascii:

This snippet shows part of the traffic from Internal to External, specifically the HTTP request and the User-Agent header (bolded, both in hex and ascii):

Ways to Obfuscate the Traffic

The User-Agent setting is connected to neither the server to which you’re connecting nor the URI you request from that server. Changing the server name and URI, even for each request, should have no effect on your software’s ability to identify rare User-Agents.

If you’re interested to see what banner string is used by default, both curl and wget can show you these:

Modern graphical web browsers can sometimes be convinced to change their User-Agent string as well, though it commonly requires installing a plugin. Search through the plugin list for something like “User Agent Switcher”.

If you come across a User-Agent you don’t recognize, enter it Here.  That site will parse the string for you and provide a simple summary of it.